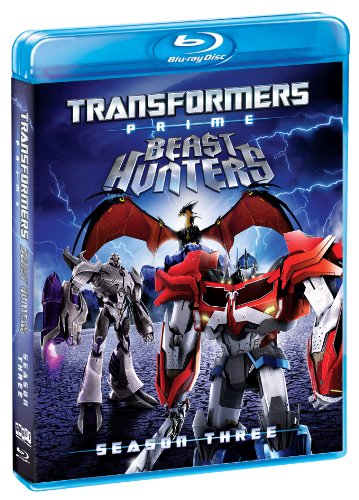 Megatron and his Decepticons have destroyed the Autobots’ headquarters, scattering Optimus Prime and his heroic team across the country and leaving them out of communication with one another. Meanwhile, Shockwave has come to the side of his commander, bringing with him the newest Decepticon weapon. Can the Autobots reunite in time to defeat Megatron and the Decepticons once and for all? Or does this new weapon mean the end for the Autobots...and Earth? Find out in the final exciting season of the Emmy Award-winning series Transformers Prime Beast Hunters! Starring the incredible all-star voice talents of Peter Cullen (Transformers films), Frank Welker (Robot Chicken), Ernie Hudson (Ghostbusters), Jeffrey Combs (Re-Animator), Michael Ironside (Top Gun), George Takei (Star Trek), Clancy Brown (Highlander), Gina Torres (Firefly), Peter Mensah (True Blood), Will Friedle (Boy Meets World) and more! .com ---- The Emmy-winning animated series Transformers: Prime concludes its episodic run with an exciting third season, which is compiled here in its entirety along with several enjoyable extras. Season three picks up directly after the destruction of the Autobots' base and apparent demise of their leader, Optimus Prime, while the newly victorious Decepticons settle into their new operations at Darkmount. The situation kicks into high gear with the discovery of a still-functioning Optimus, who leads his fellow Autobots on an assault against their foes. However, the Decepticons have already launched their newest waves of attack against the forces of good by reviving the monstrous Predaking, the first in an intended army of Predacon beasts, and then attempting to revive the Omega Lock in order to cyberform Earth. The season's 13 episodes come to a thrilling head as Optimus Prime and Decepticon chief Megatron face off in what appears to be their final showdown, while Autobot general Ultra Magnus leads his fellow heroes against the forces of mayhem. Transfomers Prime: Season Three follows in the same quality pattern of the series' preceding seasons with a solid array of action-heavy set pieces, all well depicted by a terrific cast of voice actors, including iconic performers Peter Cullen (as Optimus Prime) and Frank Welker (Megatron/Soundwave) and series regulars Michael Ironside, Steven Blum, Ernie Hudson, Jeffrey Combs, Peter Mensah, and Will Friedle. The double-disc Blu-ray includes commentary tracks on seven episodes that feature, in various permutations, executive producer Jeff Kline, members of the writing and art departments, and cast members Friedle, Josh Keaton, James Horan, and David Sobolov. The Transformers Prime panel from the 2013 Comic-Con International is also included as a 28-plus-minute featurette, while a two-minute extended scene from the season finale, "Deadlock," rounds out the season-three set. --Paul Gaita
Show More
Reviews

Disclaimer: The price shown above includes all applicable taxes and fees. The information provided above is for reference purposes only. Products may go out of stock and delivery estimates may change at any time. Desertcart does not validate any claims made in the product descriptions above. For additional information, please contact the manufacturer or desertcart customer service. While desertcart makes reasonable efforts to only show products available in your country, some items may be cancelled if they are prohibited for import in Antigua and Barbuda. For more details, please visit our Support Page.