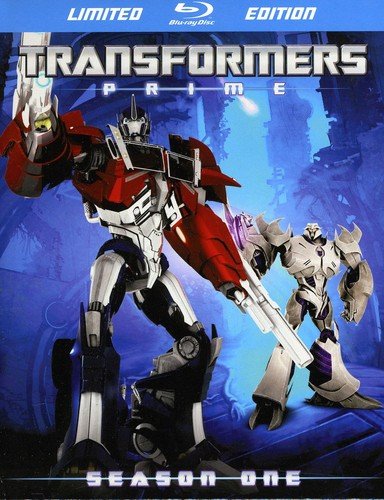 For centuries across the universe, Optimus Prime (Peter Cullen) and the Autobots have battled their greatest foes, Megatron (Frank Welker) and his army of Decepticons. But on Earth they face a new threat: discovery by the human race. By using their unique ability to disguise themselves as common Earth vehicles, the Autobots have managed to avoid detection and the risk of escalating their war to disastrous proportions. But now they require the assistance of three young human allies (Jack, Miko and Raf ) along with Special Agent Bill Fowler (Ernie Hudson, Ghostbusters) not only to help keep their secret but also to defeat the sinister Decepticons once and for all! From Roberto Orci and Alex Kurtzman, the writing team behind the megablockbuster Transformers feature films, and executive producer Jeff Kline comes an all-new series of sophisticated adventures for the Autobots, Decepticons and their human allies that boasts stellar computer animation and an impressive voice cast including Adam Baldwin (Chuck), Clancy Brown (Lost), Jeffrey Combs (Re-Animator), Dwayne The Rock Johnson (G.I. JOE: Retaliation), John Noble (Fringe), Tony Todd (Final Destination) and Gina Torres (Firefly). Also included in this limited-edition set: the 96-page Transformers: Prime prequel graphic novel by IDW Publishing! .com ---- Transformers fans disappointed by the live-action Michael Bay films and various animated permutations of their favorite Cybertronians' adventures may find some solace in the Emmy-winning Transformers Prime, a CGI series that harks back to the Transformers' heyday while adding welcome layers of depth and grit to the characterizations. There's also a touch of darkness in its central storyline, which has Decepticons Megatron (Frank Welker) and Starscream (Steven Blum) mining Dark Energon to create a "zombie" army of robots to defeat a quintet of Autobots, led as always by Optimus Prime (Peter Cullen). Aiding the Autobots in their defense of the Earth are a government agent (Ernie Hudson) and a trio of school kids who serve as a conduit between Optimus's team and the human race. As outlined by producers Alex Kurtzman and Roberto Orci (who penned two of the Bay-directed Transformers films), the action shifts between the Autobots' battles with the Decepticons and Megatron's attempts to wrest control of his minions from the rebel Starscream. The season comes to a head with its cliffhanger finale, which resurrects the robot-god Unicron (Fringe's John Noble), forcing Cybertronians on both sides of the moral fence to pick up arms against a common and devastating enemy. It's a thrilling end point to a largely terrific season with high points (Cullen and Welker reviving their '80s-era roles, Firefly vets Adam Baldwin and Gina Torres as Decepticons Breakdown and Airachnid, and cult movie hero Jeffrey Combs as Ratchet; Dwayne "the Rock" Johnson pops up briefly as well) overshadowing the lows (the unremarkable, occasionally grating young heroes). There are also 15 commentary tracks (for a 26-episode series), all featuring cast and crew members including Cullen, Hudson, Combs, producer Jeff Kline and Rafi Ruthchild, composer Brian Tyler, and even executives from Hasbro; the latter is also present for a toy featurette that exceeds the standard advertising-disguised-as-featurette pitfall by looking at unreleased characters and the conception of newer ones. The Making of Transformers Prime is a bit more by the book: it's a production by the series' broadcast network, the Hub, and covers the usual subjects (voice cast, past Transformers incarnations) without much fanfare. A 20-second preview of season two, which debuted at New York Comic Con in 2011, rounds out the extras. --Paul Gaita P.when('A').execute(function(A) { A.on('a:expander:toggle_description:toggle:collapse', function(data) { window.scroll(0, data.expander.$expander[0].offsetTop-100); }); }); Review ------ Having already given fans lovingly made DVD sets for many of the older Transformers series, including the original and Beast Wars, you knew Transformers Prime was in good hands with Shout! Factory. And as expected, they deliver big time, with the first-ever Blu-ray set for a Transformers animated series…As for extras, if you like commentaries (and I do), wow does this set deliver --Eric Goldman, IGN TV and IGN Blu-ray, March 2012 See more ( javascript:void(0) )
Show More
Reviews

Disclaimer: The price shown above includes all applicable taxes and fees. The information provided above is for reference purposes only. Products may go out of stock and delivery estimates may change at any time. Desertcart does not validate any claims made in the product descriptions above. For additional information, please contact the manufacturer or desertcart customer service. While desertcart makes reasonable efforts to only show products available in your country, some items may be cancelled if they are prohibited for import in Antigua and Barbuda. For more details, please visit our Support Page.